Because so much of Planets revolves around moving ships around, there’s a lot to be said about how one should do this.

The way engines work is that they move the square of their warp speed in light years (ly).  Thus, a tech 6, warp 6, engine moves 36 ly / turn, and a tech 10 engine (warp 9) moves 81 ly.  Thus, there is a dramatic increase in speed at each tech level.

Because the map is so big, you should put Transwarps on every ship, unless:

It is worth noting that warships should probably have at least Nova 5 drives, in case your tower is destroyed, and you have to get somewhere on your own power.  There is very little mineral cost increase between Heavynova 6’s, and Quantum 7’s, although the cost in Megacredits (MC) is a lot more.

Most of the time, you should move from planet to planet in one turn, to avoid being seen on the starmap (ships orbiting planets can’t generally be seen unless the other player has a ship orbiting that planet).  Often, even if you have to go the long way around, it’s worth planet-hopping to remain unseen.

If you are unable to planet hop and you have no other good option, then set your ship to move less than it’s maximum movement.  Doing this will hide your ship’s heading (because it wasn’t moving at all at the very end of the turn).  It’s also a good idea to end your movement equidistant from several planets, thus giving no clues about where you might have started your movement.  For example, if you move 80.5 ly from a planet, and there are no other planets within that range, an opponent can easily guess which planet you came from, and which direction you’re heading.  Instead, end up 74 ly (or any other random distance that works) from several planets.

Here are two examples of a bad waypoint, and a good waypoint.  Note that you can shift-click to queue the rest of your movement in some hosts.

It took me awhile to find this feature, but it’s really valuable.  You can queue a movement order, hold Shift, queue your next movement order, and each other will be executed on a separate, sequential turn.  Meaning – you can hide waypoints (and remember where your ship was headed!) while also queuing up movement orders.

Under or Overclock your Engines 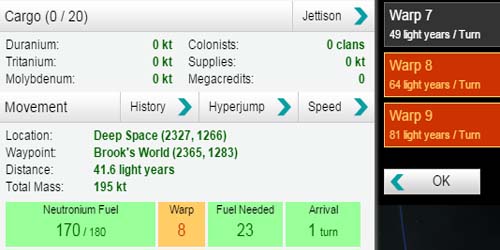 Not many new players know this, but you can actually travel Warp 8 with Tech 6 engines.  It will burn significantly more fuel, but it will allow you to get where you’re going much faster.  Overclocking works especially well with smaller, lighter ships, because the additional fuel cost doesn’t hurt as much.

Did you know that it’s the NAME of the ship that appears first on the starmap mouseover, and in the ship explosion messages, not its type?  All ships are named the same as their type when they are built, but you are free to change the name of any ship as often as you want.  For example, I could change the name of my Cobol Cruiser to “MEDIUM DEEP SPACE FREIGHTER”.  If it appears on the map, and my opponent doesn’t do some really careful math about the mass of my ship (or in Planets.Nu, read the smaller text below the name), he will probably assume that the ship is, in fact, a freighter.

I will often change the name of my ship several times if I want the opponent to think that I have more ships in the area.  For example, I could name the ship Warship Three, and then change it to Warship Two before he sees it again.  There are various mods where it will track ship IDs, and not be fooled, but some players may not pay attention to this level of detail.

The graphics below show me re-naming a T-Rex Battleship as “LARGE DEEP SPACE FREIGHTER”.  These two names would still appear in the title block of a ship, as seen by an enemy, but if the enemy only looked at the first line quickly, he might think it’s just a LDSF…

You can’t see your own ship blocks, and it’s prohibited by most hosts for a player to see two views of the same game, so I can’t give an example of my T-Rex as seen by the enemy…

Planets.nu on How To Play

Where is the Manual?

The History Behind a Lack of Correct Documentation for VGA Planets