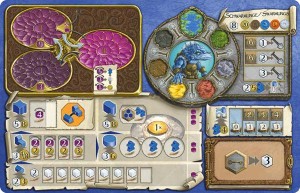 Although Swarmlings get a massive resource stockpile at the start of the game, they must quickly turn this into income, as all their buildings are very expensive.

Early game, you ideally want at least two more Dwellings and a Trading Post. You may have to ignore the victory points on any early Stronghold Round tiles (rounds one or two), as upgrading that early can really stall your economy.

However, upgrading to a Temple by Round 2-3 can be very worthwhile, as the Priest income and Favor Tile bonus can net you a lot of needed Victory Points or Income from both the Favor Tile itself, and also from increases on the Cult tracks.

Consider a Sanctuary when playing the Swarmlings – founding a second town nets you a worker boost, and the Sanctuary also gives a two-priest income, which is significant, and superior to most other Factions.

Despite the pile of resources you start with, your choices will be similar to other Factions: grab the most resources you can, and the Transform bonus tile is still the best one at the start (see General Strategy).