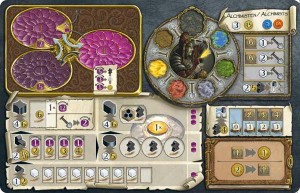 You may trade 1 Victory point for 1 Coin, or 2 Coins for 1 Victory Point anytime and any number of times (Sorcerer’s Stone).

After building the Stronghold, immediately and only once gain 12 Power. From now on, gain 2 Power for each Spade you get throughout the remainder of the game (regardless of the way you get the Spade).

The alchemists get extra Victory Points (VPs) for Coins.  Fortunately, they have several ways of getting Coin, including highly efficient 3rd and 4th Trading Posts and a Stronghold with a Coin income. Their stockpile of Coin can even be turned into VPs and back again!  The Alchemists’ Stronghold income is better than it looks. Six (6) coins is two (2) VPs per turn! Also, getting this much gold income in any other manner is quite difficult, and the 7-Coin power action isn’t always easy to get.

No other Faction can get a significant Coin income as easily as the Alchemists.  Furthermore, the bonus of 12 power early in the game (before you burn much power), and then bonus power whenever you generate Spades (which you will do frequently) are both very good.  However, you should still try to build at least one (1) additional Dwelling at the start of the game, as you don’t want to get stuck with a low worker income.  The sudden windfall of Power should get you enough extra resources to build a bit more after erecting your Stronghold.

Once you have a Stronghold, you should try to grab the VPs-for-Stronghold Bonus Tile whenever possible:

The problem with early Trading Posts, even if the Round Tiles call for it, is that your worker income will suffer heavily.  I normally advocate no more than one (1) Trading post in Round one or two, simply because it will prevent you from expanding aggressively early.  However, if you want to go with more Trading Posts, you should use the extra Coin and Power to upgrade your Spade efficiency, so you can catch up on expansion in later rounds.

In general, you want to grab Coins whenever you can get them.  The 6-Coin Bonus Tile and the 7-Coin Power action are each worth 3 VPs to you, which is about the same as building a Trading Post on the right Round Tile.

The Alchemists are placed very similarly to the Darklings.